Caitlyn Jenner, who won an Olympic Gold Medal in the men’s marathon before transitioning to female, just came out against trangendered women competing in women’s sports. This might seem both unenlightened given our recent trend to gender neutrality and unnecessary given the fact that TV shows, TV ads, and in the movies constantly bombard us with depictions of lithe, svelte, beautiful women outdoing males in all sorts of physical activities from combat sports to track and field, and even to opening stuck jar lids. And there are women who have successfully competed at the highest level of sports against men. Babe Didrikson Zaharis comes to mind.
The current furor over the issue of trangendered females competing against biological females ignores the reason we have women’s sports. I think the reason which can easily be demonstrated by looking at a few sports records to see if women excel men in real life as completely as they do on TV and in the movies: 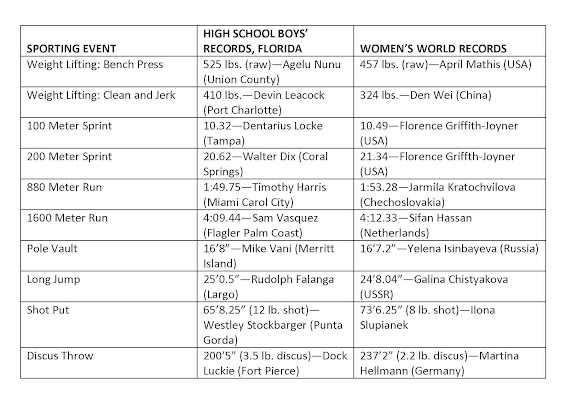 NOTE: Boys’ records come from the Florida State High School Activities Association’s record books for weightlifting and track and field. The women’s records can easily be checked on Google.
We see that the only two events where world champion professional women outperform amateur high school boys are the shot put and the discus. Of course, the women are tossing much lighter implements than the boys.
Let’s use these statistics to perform a thought experiment: What if we jumped in our time machine, went and got these boys at the age and stage of development they had attained when they set these state records, convinced them that they were really girls, and entered them in the 2024 Summer Olympics? They would be competing against world class professional women who had trained almost their whole lives to excel in their sports. How would they do? These amateur teenagers who had been practicing their sport for only a few years would probably bring home a sack full of gold medals.
We have women’s sports because a person with a woman’s body cannot be expected to compete with people who have men’s bodies in contests of strength, power, and speed. It is a biological fact that is ignored only at the peril of the safety of people with women’s bodies.
When Cecil decides that he is a woman trapped in a man’s body and gets his gender reassigned to become Cecilia, changing to feminine pronouns when referring to her does not change the fact that Cecilia still has a man’s body. As proof of that proposition, I offer as evidence the y chromosome and the prostate gland, neither of which exist in the bodies of biological females. The y chromosome gives men a number of attributes relevant to fairness in sporting competition—bigger bodies, stronger bodies, more testosterone, and facial hair.
In contact sports like baseball, basketball, and lacrosse, this is going result in physical injuries to biological females. In collision sports like football, boxing, and MMA it can result in catastrophic physical injuries.
The main reason I see for allowing trangendered females to compete in women’s sports is the fact that their feelings will be hurt if they are excluded. I have a suggested remedy for the psychological injury that a transgendered woman might feel because she is being excluded from women’s sports—complete gender-neutrality in sports. Do away with men’s and women’s categories in sports and go to two divisions. One division, let’s call it the Y Division, will be open to anyone who wishes to compete, male or female, cisgendered, transgendered, pangendered, or ungendered. The second division, let’s call it the X Division, will be closed to anyone endowed with a y chromosome.
Posted by George R. (Bob) Dekle, Sr. at 10:01 PM No comments:

THE ROLE OF THE PROSECUTOR


On May 23, 1895, Britton Bath Osler, the greatest Canadian prosecutor of the 19th century rose to make his final argument in the most sensational murder case that had ever been tried in the courts of Toronto. Arrayed against him on the other side were two of the most distinguished defense attorneys of the age, and they were aided by a man who was arguably the greatest American prosecutor of the 19th century, Francis L. Wellman, who had recently gone into private practice in New York City. Defense counsel, having spoken for almost eight hours, had ended their argument with an impassioned plea to spare the defendants' lives and return them to their wives and aged mother.
In attempting to defang the powerful arguments of his opposition, Osler called upon the jury to be guided by facts, not emotion. He then gave a statement of the role of a prosecutor which should be etched in the heart of all prosecutors everywhere:
"My function is simply to aid you in getting at the truth, and is entirely different from that of the prisoners’ counsel. It is the duty of the Crown' counsel to press home the facts. It is not his duty to present facts with an apology for presenting them against the prisoners. He is to treat the prisoners fairly, rightly; conceal no evidence that comes to his knowledge. He has to aid you in coming to a just conclusion upon the facts, and if acquittal follows and he has done his duty that is all the community asks of him."
William Randall Slaughter, the State Attorney of the Third Judicial Circuit when I began practicing law, made a similar statement when he told me, "A prosecutor doesn't win a case by getting a guilty verdict. A prosecutor wins a case by getting past a judgment of acquittal and getting a jury verdict. Whatever the jury says, the prosecutor has done his job." His language was a little more colorful than what I have reported, but I try to keep things on a PG level.
My next project, if I live long enough to complete it, will be a chronicle of this long-forgotten episode in Canadian legal history. It is, for me at least, a fascinating look at a titanic legal struggle in a court system that is somewhat unfamiliar to modern Americans.
Posted by George R. (Bob) Dekle, Sr. at 10:49 AM No comments: