Since I wrote my first blog post on Chessgi (Also known as Crazyhouse Chess, Mad Mate, and Neo-Chess), I have been doing some thinking about the best way to play the game without having to be bothered with cumbersome Western-style Chessmen. As you recall, in Chessgi, when you capture a piece, that piece becomes yours and may be parachuted back onto the board in your service on a later move. The challenge of using a Western-style Chess set is the changing of colors of the pieces as they are captured and recaptured. You need at least two sets of Chessmen, and the constant swapping out of pieces can be a tedious and easily botched process.
I think I have hit upon a quick and simple way of improvising an easily-used Chessgi set. It is much less labor-intensive than making the set I featured in my previous blog post. Caveat: As I describe how a serviceable Chessgi set can readily be made, I am going to mention brand-name products and the stores which stock them. I am not promoting any particular brand of product or any particular merchant. I’m just talking about the materials I used. Similar materials can be gotten from other dealers.
Step 1: Go to Hobby Lobby and buy 40-50 Wooden Nickels (You’ll want some spare pieces for promotion purposes) and a bottle of matte Mod Podge, some artist’s paint brushes, and some rubber gloves.
Step 2: Go to OfficeMax or Office Depot and buy a packet of Avery 1” diameter round labels (Template 6450).
Step 3: Go to http://www.enpassant.dk/chess/fonteng.htm and download a Chess font. There are several freeware fonts on this site, and you can choose the style you like best.
Assuming you have a computer and a printer, you now have everything you need.
Step 4: Print out your Chess fonts, one to a label onto two sheets of labels.  There are only 63 labels on a sheet of 6450 Avery labels, and you’re going to need at least 64 printed labels. You should print at least two full sets of white pieces and two full sets of black pieces. While you’re at it, print some extra queens and minor pieces for promotions. If you’re going to follow the rule that a promoted piece loses its promotion on capture, you should make the promoted pieces distinctive, possibly by putting a + before the figurine or printing the figurine in a distinctive color. Red would be a good color. That is the color of promoted pieces in Japanese Chess (Shogi)
Step 5: Stick all the labels bearing white figurines on the Wooden Nickels. When you have completed this task, turn the Wooden Nickels over, and stick the labels with the black figurines on the other side. Make sure you have the same rank depicted on both sides of the same Wooden Nickel.
Step 6: Mod podge all the black figurines. One coat should do it if you spread it on thick, but I like to put on at least two coats. The Mod podge keeps the labels from either getting dirty or peeling off. Let the black side dry thoroughly.
Step 7: After the black side has thoroughly dried, flip the Wooden Nickles over and Mod podge the white figurines. Let the white side dry thoroughly.
Step 8: Set up your Chessboard, putting White on one side and Black on the other. The board should look like this: 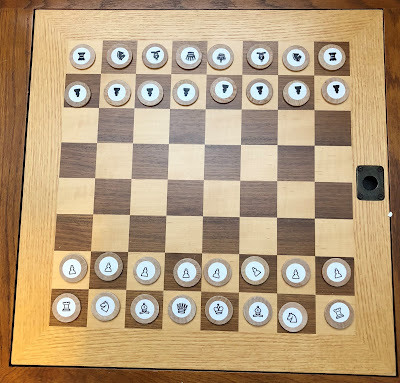 Step 9: Play the game. When a piece is captured, the capturing side takes the piece, flips it over to show the capturing side’s color, and sets it on the side of the board in view of the opponent. On a subsequent move the piece may be re-entered.
This idea is not original to me. Chessgi used to be marketed in the Abacus Wood Box Series under the proprietary name Neo-Chess, and the pieces were cylinders of differing heights with black figurines on one end and white figurines on the other. You can sometimes pick up an old Neo-Chess set on ebay.
Posted by George R. (Bob) Dekle, Sr. at 4:12 PM No comments:

There's a new documentary airing this Sunday on the Oxygen Channel about Ted Bundy. Apparently it highlights his relationship with attorney John Henry Browne, who represented Bundy in some of his legal difficulties out west. I just read a Fox News Article article on the documentary which features an interview with Browne about Bundy. I'm not going to talk about Browne's opinions on Bundy's personality. I do, however, want to clear up some inaccuracies in the article. Browne is quoted as saying:

"He [Bundy] also turned down the plea bargain I got for him. Nobody would ever believe you could get a plea bargain for Ted Bundy, but I did with one other lawyer… He turns around and says, ‘I’m not going to do it.’ That’s when we told him we weren’t going to help him anymore."

There are two problems with this statement. As I recall, (1) John Henry Browne didn't get a plea bargain for Bundy, Mike Minerva did; and (2) Bundy didn't refuse to accept the plea agreement; the prosecution vetoed his offer of plea. I was there for the plea fiasco, and my memory of it varies significantly from Browne's.

I think it was John Barth who wrote something to the effect that everyone is a hero in his own biography, meaning that we sometimes remember our roles in an event as being more significant than they really were. Browne's role in the plea agreement was significant for one reason, and it had nothing to do with negotiating the plea bargain. Chi Omega prosecutor Larry Simpson, Second Circuit State Attorney Harry Morrison, my boss Third Circuit State Attorney Jerry Blair, and I were on the other end of the abortive plea bargain, and if I ever spoke to Browne while we were negotiating the plea bargain I don't remember it. As I recall the subject of the plea bargain was first broached to me by Public Defender Mike Minerva as we had lunch during a deposition break in Tallahassee. I took Mike's overture to my boss Jerry Blair and we went with it to Larry Simpson and Harry Morrison. Mike may have also made overtures to them, but if he did I don't remember it.

After a lengthy process of discussing the matter with family members of the deceased parties, law enforcement officials working the case, and lawyers whose judgement we trusted, we eventually took a deep breath and agreed that 100% certainty of keeping Bundy off the street for the rest of his life was better than going for the death penalty, losing, and turning him loose on society again. Jerry and I agreed that taking the plea might very well end our careers as prosecutors, but that would be a small sacrifice if we could make sure Bundy never killed again.

As we were working out the details of the plea, Mike Minerva told us that in order to sell Bundy on the plea bargain they brought in John Henry Browne to convince him to take the plea. Would we mind Browne being involved in the taking of the plea? We didn't. If it would grease the skids and expedite the plea, we had no objection. We strongly urged Mike to make Bundy understand that we would tolerate no antics at the plea hearing. Bundy would have to behave himself if he wanted the plea. We drafted a written plea offer which Bundy was to sign, and scheduled the hearing.

It was a fiasco. When we got to court, Bundy immediately took center stage and began berating Mike Minerva and proclaiming his innocence. As his tirade progressed, I spoke with Jerry and Larry about the advisability of going ahead with the plea in light of his antics. We all agreed that we could not under any circumstances take a plea from Bundy in light of his complaints about how Mike Minerva didn't have Bundy's best interests at heart.

I was sitting next to Mike Minerva, who was in turn sitting next to Bundy. Bundy was standing as he ranted about Mike. His tirade seemed to go on forever. Finally, he picked up the plea offer up off the table in front of him, and it looked to me like he was about to announce that in light of the sorry service he was getting from Mike Minerva, he was being forced to plead guilty. I leaned over to Mike and asked "That silly b@st@rd isn't fixing to plead, is he?" Mike said that he thought Bundy was about to plead. I replied "Tell him to sit his @$$ down, we ain't taking no plea." Mike tugged on Bundy's coat sleeve and whispered in his ear. Bundy looked surprised and distressed. Then he sat down. And thus ended the one of the most painful court hearings of my career as a lawyer.

We couldn't take the plea because it would be subject to collateral attack as being involuntary. Apparently Bundy thought we'd be dumb enough to take his "involuntary" plea; he could wait in prison a few years until the case against him had had deteriorated beyond repair; and then he could move to vacate his plea and walk free.

Which is the second misconception fostered by the above Fox news article. Bundy didn't refuse to plead. The prosecution refused to accept his carefully stage-managed "involuntary" plea.

A third inaccuracy in the article has to do with David Lee, the man who arrested Bundy in Pensacola. Of Lee's arrest, Browne is quoted as saying:

"He [Bundy] gets caught by a 300-pound older police officer when Ted was in the best physical shape of his life."

There are very few Southern law enforcement officers who fit the mold of Sheriff Buford T. Justice from "Smokey and the Bandit," and David Lee was not one of them. When Lee arrested Bundy, Lee was young, strong, and in excellent physical shape. Good enough shape to pound the tobacco juice out of Bundy when Bundy violently resisted arrest. Here is a "Reader's Digest" account of the arrest: Lee stopped Bundy and placed him under arrest for loitering and prowling. Bundy broke free and began to run away. Lee fired a shot at Bundy. Bundy fell to the ground. When Lee approached Bundy and began to examine him to determine if he was wounded, Bundy attacked him. Lee beat Bundy into submission. My favorite photo of Bundy is his booking photo from the Escambia County Jail.