I am slowly but slowly transcribing the testimony of the witnesses in the Lindbergh Kidnapping trial. As of the writing of this post, I have transcribed the first thirteen witnesses. Anyone interesting in following my progress can check this index page, which has hyperlinks to the transcribed witnesses. LKC: TESTIMONY OF WITNESSES I will update it as new witnesses are transcribed.
Posted by George R. (Bob) Dekle, Sr. at 3:57 PM No comments:

BUILD A BENCH IN 12 EASY STEPS

Long ago we bought a picnic table and two benches from a local hardware store. I put them together, and they sat decaying in our yard for years, as I kept repairing and reinforcing them to last a little longer. Then one bench decayed beyond hope of salvation and had to be trashed. Next came the picnic table. Finally we had only one bench, and I went and bought another picnic table with built in benches. It began to decay and I have rebuilt and reinforced it a number of times until little remains of the bench we bought and it now consists of the replacement parts I put on it.


A few days ago, as my wife set up an outdoor birthday party, my wife asked me to check our sole remaining single bench to see if it could stand up to the seats of several people’s britches. I pronounced it unsafe for human habitation and incapable of being salvaged, and we sorely missed it at the birthday party.  It was too close to the party to make a new bench, but just as soon as the party was over I began work on replacing the bench. Here is how I did it.


The hardware that you will need to turn four 2x4’s into a bench are: a pencil, a saw, a drill, a speed square, some clamps, and an assortment of deck screws from 3 to 4 inches in length.


The clamps: C-clamps will do, but I like the Irwin quick-grip style of clamps and have an assortment of sizes hidden in various places in my workshop.


Why deck screws rather than nails? Nails back out over time. The teeth on a screw help keep it in place.


Use star-drive screws: Even when you drill pilot holes in fresh pressure treated lumber, it’s going to be a chore driving a 3 to 4 inch deck screw into the wood. Phillips head screws are famous for stripping out and leaving you with a screw partway in the wood and no way to back it out or drive it home except with a hammer. You can buy bits at the hardware store that are specially made for backing out Phillips head screws which have been stripped out. Or you can use star-drive screws. They come with the proper size bit in the box, and it takes more torque than any of my drills can generate to strip them out. In case you're wondering what a star drive screw is, the head looks like this: 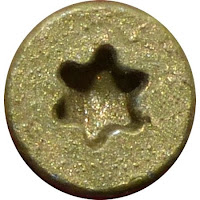 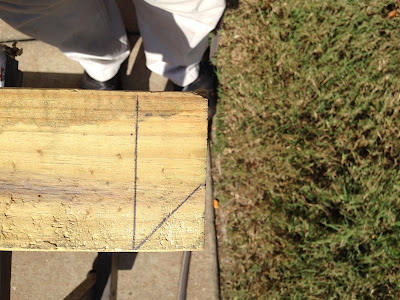 When you get it cut, it should look like this: 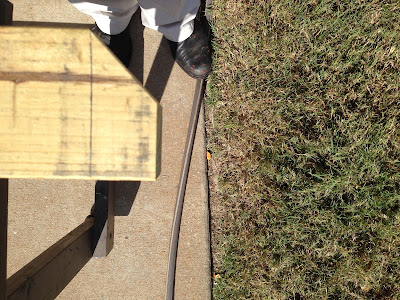 STEP 3: Now take the short ends and cut three 10 ¾” pieces. These are going to be the crossties that tie the runners of your seat (the three long boards) together. Turn the crossties on their sides and take a 30 degree cut off each end. You can use the speed square to mark of a 30 degree line, but most chop saws will have a 30 degree preset. When you get the crossties cut, their narrow sides should look like an isosceles trapezoid: 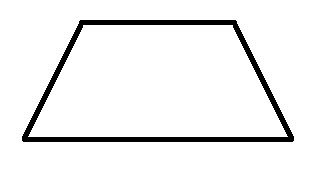 If one of your pieces ends up looking like a parallelogram:

set it aside and cut another crosstie:

STEP 4: Lay the runners side by side and put the crossties on them at a 90 degree angle. The lines you drew for your 45 degree cut on the ends of the runners shows you where to put two outside crossties. Measure carefully and put the third crosstie in the middle. 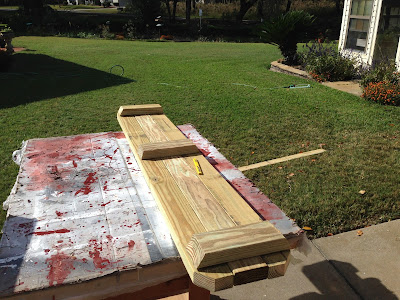 STEP 5: Clamp the pieces together so they fit tightly and then fasten the crossties to the runners with 3” screws, two per runner. 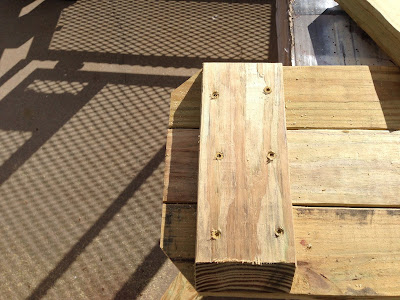 STEP 6: Take the fourth (uncut) 2x4 and make a 45 degree cut on its end. Measure 17 ½” down from the sharp end and make a mark. Make another 45 degree cut at the mark. You will now have a board which looks like a 17 ½” parallelogram. Mark this board with a big X on both sides. It is going to be your pattern for cutting the legs. Take your pattern and lay it down on the angled end of the long board so that both pieces are angled in the same direction. Draw a line along the far end of the pattern and cut. Repeat three times. You now have four legs the same length, which is going to be somewhat different than your pattern is. That’s why you don’t use the pattern as a leg. You’ll have three legs the same length and the fourth a different length. That’s also why you use the same pattern for cutting each board. If you cut one board and use it for a pattern to cut the second; then take the second and use it as a pattern for the third; then use the third as a pattern for the fourth; you’re going to wind up with no two legs the same length. 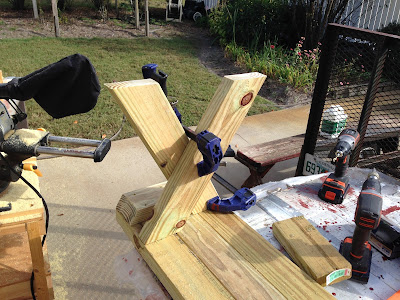 
STEP 9: Take one of your leftover short pieces which has a 30 degree cut in one end, like this: 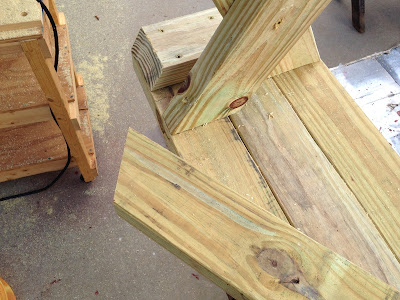 Stick the slanted end into the gap so that it fits flush with the inside leg. Mark a line on it down the edge of the outside leg. 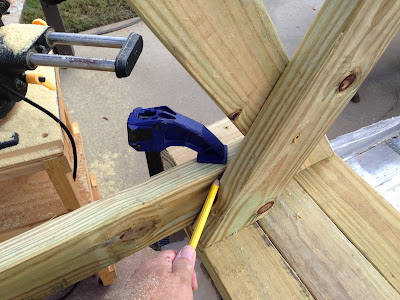 Now cut it along the marked line, and you’ve got a trapezoidal piece that looks like this: 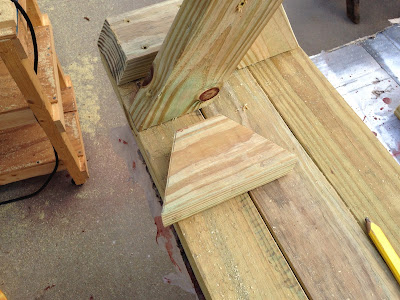 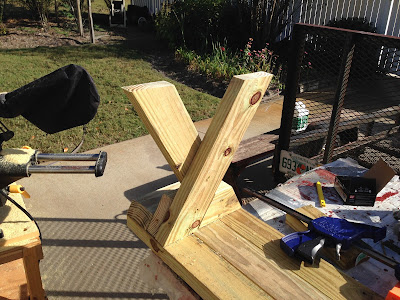 
STEP 11: Brace the legs by toenailing in a diagonal board. You can cut it with two 45 degree angles or you can vary the angle of each cut, just so that the total of both angles adds up to 90 degrees. I braced this bench with braces which had cuts of 30 degrees and 60 degrees. When I got through, it looked like this: 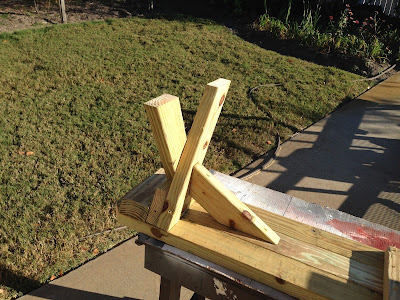 I used a 30/60 brace because I had a lot of leftover pieces that already had 30 degree cuts in them. A chop saw doesn’t have a 60 degree preset, but you can draw a guideline for your cut by using your speed square. Put one side along the 30 degree cut with the other side intersecting the board like this: 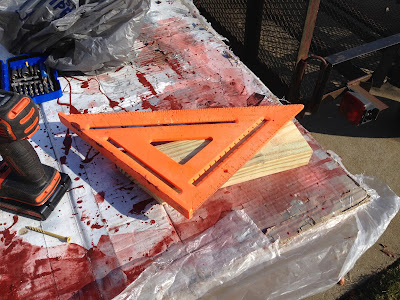 You’re almost through building it now.


STEP 12: Set the bench on its feet and screw the outside runners to the legs using 4” deck screws. 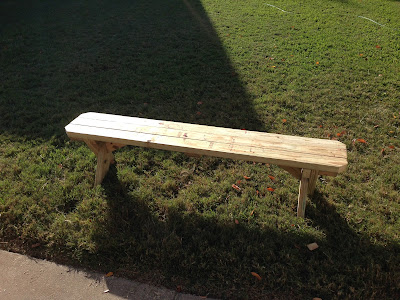 I’d recommend painting the bench, and the color I recommend is barn red. White is pretty, but it gets dirty in a hurry and fades over time. Barn red masks a multitude of sins. If you used construction grade 2x4’s instead of pressure treated lumber, you must paint and seal the bench, or it will be rotted in no time sitting out in the yard.
My investment in the bench came to just under $25 using pressure treated 2x4’s from Lowe's at $4.29 each and star-drive screws left over from previous projects.
.