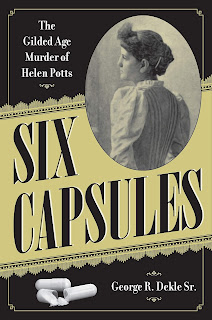 I haven't posted much in the past few months for a number of reasons. I've resolved to post more regularly in the future, and I can't think of a better post than to announce the publication of my latest book, Six Capsules: The Gilded Age Murder of Helen Potts. You can visit the Kent State University Press webpage for the book by clicking on the title. The publisher describes the book in the following language:

The permanent solution to a wife’s chronic headache

As Ted Bundy was to the 20th century, so Carlyle Harris was to the 19th. Harris was a charismatic, handsome young medical student with an insatiable appetite for sex. His trail of debauched women ended with Helen Potts, a beautiful young woman of wealth and privilege who was determined to keep herself pure for marriage. Unable to conquer her by other means, Harris talked her into a secret marriage under assumed names, and when threatened with exposure, he poisoned her.
The resulting trial garnered national headlines and launched the careers of two of New York’s most famous prosecutors, Francis L. Wellman and William Travers Jerome. It also spurred vigorous debate about Harris’s guilt or innocence, the value of circumstantial evidence, the worth of expert testimony, and the advisability of the death penalty. Six Capsules traces Harris’s crime and his sub­sequent trial and highlights what has been overlooked—the decisive role that the second-class status of women in Victorian Era culture played in this tragedy.
The Harris case is all but forgotten today, but Six Capsules seeks to recover this important milestone in American legal history
It was a lot of fun to write this book, in part because the lawyers involved in the case were such larger-than-life characters. Francis L. Wellman, author of the venerable Art of Cross-Examination, was the lead prosecutor; and William Travers Jerome, who later went on to be one of New York City's most celebrated District Attorneys, defended. William F. Howe, whom history remembers as a thoroughgoing scoundrel, handled the case on appeal.

The defendant was Carlyle W. Harris, who had a drunkard father, a temperance crusader mother, and an insatiable appetite for sexual conquest. Harris was a truly brilliant medical student, and he was charismatic and handsome to boot. Most women readily succumbed to his charm, but Helen Potts was made of sterner stuff. He had to talk her into a secret marriage to get what he wanted from her, and the romance went off the rails when her mother found out about the marriage.

Although nobody remembers the case today, it was a nationwide sensation at the time, and it sealed Francis Wellman's reputation as a deadly cross-examiner. I particularly enjoyed critiquing Wellman's strategy as he systematically destroyed almost every witness called by the defense.
Posted by George R. (Bob) Dekle, Sr. at 9:42 PM 1 comment:

A CHARACTER SKETCH OF ABRAHAM LINCOLN

The following comparison of Abraham Lincoln with his colleague, Kirby Benedict, comes from pages 39 & 40 of Kirby Benedict: Frontier Judge. It is a direct quotation of an article in the Danville Illinois Citizen of May 29, 1850:


Abraham Lincoln and Kirby Benedict are the direct antitheses of each other and are as widely separated as heaven and earth. Benedict is easy, graceful and fascinating. Lincoln is rough, uncouth and unattractive. The former is kind, affable, and courteous ; while the latter is stern, solemn, and unfamiliar.


Benedict has never been a deep thinker and, in his arguments, he depends almost entirely upon the resources of a rich and powerful imagination. As far as oratory is concerned, he transcends, by far, any member of the Bar on the Circuit; and it is perhaps true that he possesses more than all the others combined.


At one moment he dissects the testimony of a witness and over some trivial flaw, vents all the gall and bitterness of his invectives; then suddenly the mockery ceases and he solemnly and earnestly pleads for his client as his tones range from dulcet to fortissimo or the thunder of Niagara.


Yet with all his brilliancy and wit, the fascination of his eloquence and the sparkling joyousness of his disposition, he is never happy when alone. He lives only when his mind can be on the wing and like a caged eagle, pines when his pinions are fettered.

How different is Lincoln! He is gifted with a mind deeply imbued by study. His style of reasoning is profound; his deductions logical and his investigations are acute. In his examination of witnesses, he displays a masterly ingenuity and a legal tact that baffles concealment and defies deceit. When he addresses the jury, there is no false glitter or sickly sentimentalism. In vain we look for a rhetorical display of sublime nothings. His argument is bold, forcible, and convincing.

Such are some of the qualities which place Lincoln at the head of the profession in this state and although he may have his equal, it would be no easy task to find his superior.