Here's a link to a blog post by the Alachua County Public Library describing my newest book, "Six Capsules."

MEMORIES OF WOODSTOCK ON ITS 50th ANNIVERSARY

I was running an errand to the grocery store this morning and as I was checking out, I saw a special edition of Life magazine celebrating the 50th anniversary of Woodstock. I thought it would be appropriate at this point in history for me to share my memories of Woodstock:

When Woodstock was going on, I was blissfully unaware of this milestone in popular culture. I was too busy listening to the Grand Ole Opry on Clear Channel 650, WSM, Nashville, Tennessee. In my mind, wood stock was what you put on a shotgun or rifle.

For any modern day readers who don't know what I'm talking about when I say wood stock, here's a picture:

The first news I got of Woodstock was an article in the then-weekly Life magazine. What I remember most vividly about that article is a picture of a shapely young girl dancing topless and seemingly enjoying herself immensely. Pretty tame stuff by 21st century standards, but jarring at the time. Looking at the crowd pictures in Life, I remember thinking, "What a bunch of idiots." Maybe I was wrong to think that, but I was young and inexperienced at the time. My opinion hasn't changed. Maybe I'm old and out-of-touch with 21st century pop culture. I wouldn't walk across the street to go to a rock concert, much less go live in a tent in a far distant state. I still listen to the music I love at Willie's Roadhouse on Sirius XM.

The whole "love, peace, tranquility, and weed" movement of the 1960's left me cold. When they have the first war protest riots at the University of Florida my parents frantically called me to make sure I was okay. "What riots?" I asked. The riots were going on down on 13th Street in front of Tigert Hall, where I never went except under duress. I assume that the location of the riots was chosen to make it more convenient for the TV cameras. In the dormitories and classes, it was life as usual.

Despite being so out-of-step with the cultural trends of the last half of the 20th century, I survived. I didn't buy the special edition of Life at the grocery store. I saw enough of Woodstock back in 1969.

And now I live in a world as fraught with discord as the 1960's. America survived that cataclysmic time and emerged a better place. I hope and pray it does the same in this present tribulation.
Posted by George R. (Bob) Dekle, Sr. at 11:34 AM 1 comment:

The pictured notice was posted on the Gainesville Public Library website. I’ll be giving the talk at the main branch on 401 East University Avenue at 2:30 p.m. on Sunday, August 25. 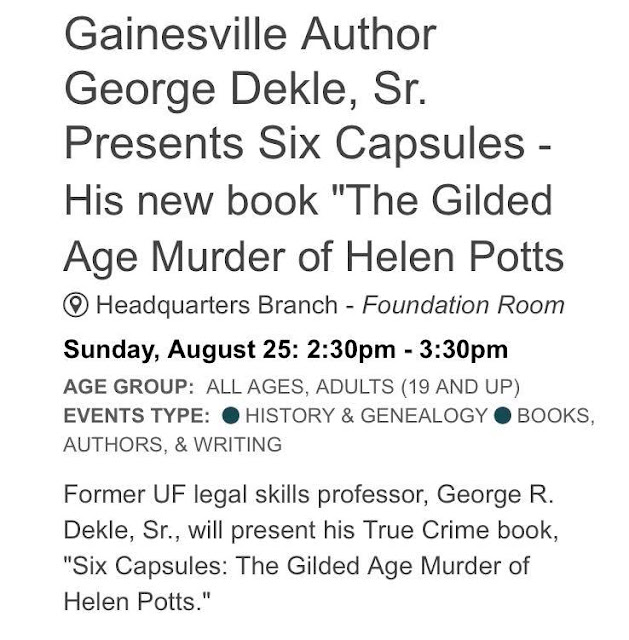