In the first ten days after publication, "Six Capsules" has gotten a lot more notice than I am used to getting on the launching of one of my books. Perhaps this means I'm getting better at writing, or more likely it means that I randomly chose a case which seems to resonate with a lot of current issues: #Metoo, abortion, women's rights, and "celebrity" killers to name a few. Whatever the cause, I'm glad that the book is getting noticed, because I think it tells an interesting story about an important case from long ago. Here are some of the mentions:

I also did a podcast interview on the book. I will post a link to the podcast when it is published.
Posted by George R. (Bob) Dekle, Sr. at 12:38 PM No comments:

Six Capsules is officially published now, and Amazon has apparently sold out already. They began by offering it at a steeply reduced price, and the next thing I knew, the price was back up and they were saying that they only had one copy left. Now if you go to the Amazon page for the book, they have an announcement saying that they will deliver the book within one to two months. I'm pleased that the book seems to be selling well, but disappointed that Amazon didn't begin by stocking more books.

We've gotten some notice of the book on the web. The website "Clouded in Mystery" has written a nice review of the book [SEE REVIEW HERE], and the New York History Blog has published an article on it. [SEE ARTICLE HERE].

I'm lining up some book talks, and the first is going to be at the Alachua County Library District's headquarters, which I believe to be located at 401 East University Avenue in Gainesville. I'm slated to give the talk on August 25 at 2:30 PM.
Posted by George R. (Bob) Dekle, Sr. at 10:04 PM No comments: 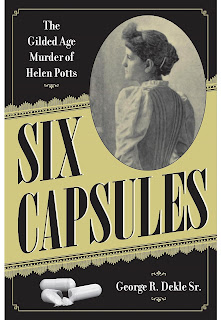 My latest book, Six Capsules: The Gilded Age Murder of Helen Potts, comes out on May 14, 2019. Here is the language from the back cover of the book:


“Very few historical nonfiction writers capture the essence of an era. Fewer do that with the grace and talent of a novelist. George Dekle not only presents the story of what could be the first #MeToo moment in American history—complete with deception, psychopathy, murder, and justice—but elevates his narrative by compassionately showcasing victim Helen Potts’s role in American history as a forgotten martyr for women’s rights. An incredible book, Six Capsules is the first must-read of the spring 2019 season ... teeming with vitality, integrity, insight, new information ... delving into the dark elements of a society long forgotten. A stimulating, lavish and page-turning narrative.”—New York Times bestselling author M. William Phelps


“‘Was an innocent man murdered by the State of New York?’ Dekle deftly, and broadly, addresses that question on two fronts—yesterday, through a detailed deconstruction of the late 19th century trial proceedings, and today, from his perch as both prosecutor and law professor emeritus.”—William L. Tabac, author of The Insanity Defense and the Mad Murderess of Shaker Heights: Examining the Trial of Mariann Colby


As Ted Bundy was to the 20th century, so Carlyle Harris was to the 19th. Harris was a charismatic, handsome young medical student with an insatiable appetite for sex. His trail of debauched women ended with Helen Potts, a beautiful young woman of wealth and privilege who was determined to keep herself pure for marriage. Unable to conquer her by other means, Harris talked her into a secret marriage under assumed names, and when threatened with exposure, he poisoned her.


The resulting trial garnered national headlines and launched the careers of two of New York’s most famous prosecutors, Francis L. Wellman and William Travers Jerome. It also spurred vigorous debate about Harris’s guilt or innocence, the value of circumstantial evidence, the worth of expert testimony, and the advisability of the death penalty. Six Capsules traces Harris’s crime and his subsequent trial, and highlights what has been overlooked, the decisive role that the second-class status of women in Victorian Era culture played in this tragedy.


George R. Dekle Sr. served as a legal skills professor at the University of Florida, where he directed the Prosecution Clinic. His most recent book, Prairie Defender: The Murder Trials of Abraham Lincoln, won a Superior Achievement Award for Scholarship from the Illinois State Historical Society and Gold Medals for Biography and Politics from the Florida Authors and Publishers Association.

Zac Efron has announced that Ted Bundy got away with murder because of "White Privilege." No matter how thinly you slice his words, they are still baloney. White privilege had nothing to do with Bundy's getting away with 27+ murders. I am going to explain how Bundy (and other serial killers) got away with so many murders, and I am going to do it in words of one or two syllables. In order to do this, I'm going to have to use SK to mean "serial killer" because "serial" has three syllables:

Bundy got away with so many murders because he killed strangers. SK's kill people they don't know. When you kill someone you don't know, it's hard for the police to connect you to the murder. When the police got enough to connect Bundy to a murder, they nailed him. Bundy's skin color had nothing to do with him getting away with 27 murders.

I'm going to start using bigger words now: The fact that Bundy was a good looking, articulate white guy may have contributed to his celebrity, but it did not give him any sort of advantage when he became ensnarled in the criminal justice system.

I'm going to stray from the main subject now: The myth of "Bundy the criminal mastermind" is as big a pile of organic fertilizer as "Bundy the benificiary of white privilege." Bundy was a cunning psychopath, but far from a criminal mastermind. At his two trials in Florida his nincompoopery and grandstanding in court served in no small measure to help ease the burden of proof on the prosecution. That's not a criminal mastermind, that's a criminal dumb@$$.
Posted by George R. (Bob) Dekle, Sr. at 9:08 PM No comments: