THE LINDBERGH KIDNAPPING CASE: A CRITICAL ANALYSIS OF THE TRIAL OF BRUNO RICHARD HAUPTMANN 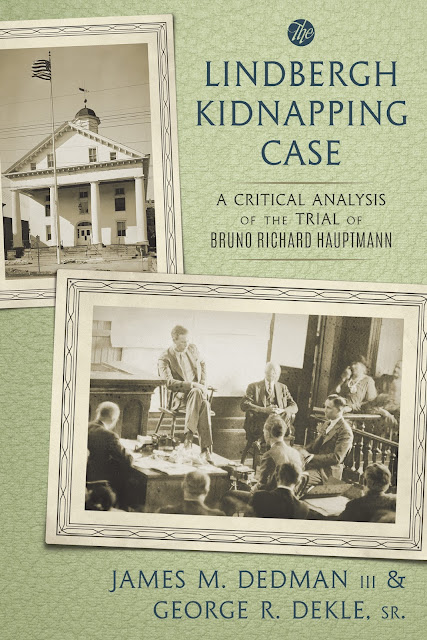 It seems like a decade ago that Jim Dedman asked me if I wanted to collaborate with him on a book about the Lindbergh Kidnapping Case. Knowing absolutely nothing about the case, I said "Sure, why not?" The idea for the book was not to prove that Hauptmann was or was not guilty, or to prove that anyone else may or may not have been guilty. We were just going to look at the trial itself, the available evidence, and the performance of the lawyers involved and try to state a "learned" opinion on how well or poorly the case was tried.

We worked on the project through many fits and starts, with time off for illness and the demands of other projects, but we stuck with it and finally got it done. We pitched the book to The Lawbook Exchange/Talbot Publishing, and they liked it. We had been working with them for several months before I realized that the company was located in New Jersey. Now it's near done and set for publication in September of this year (2016). They're already taking pre-publication orders on their website. (See the hyperlink above).

The book is technical in nature, and it talks a lot about legal evidentiary requirements, trial strategy, and advocacy techniques, but (I think) it is written in non-technical language. You don't need a law degree to understand and appreciate the legal maneuverings that went on in the trial. At the end of the book you should be equipped to decide for yourself whether Hauptmann was guilty and whether he got a fair trial. These two issues are independent. It's possible for a guilty person to get railroaded, just as it is possible for an innocent person to get convicted at a fair trial. If you read the book, you'll have to make up your mind for yourself on these two issues. We don't give our opinions on those questions, and we've tried to be even-handed enough for fair-minded readers to be able to support a decision on either side of both issues.

Rather than describe the book myself, I'll let some of the advertising copy do that job:

The kidnapping and murder of Charles A. Lindbergh Jr. touched off one of the most massive manhunts in the history of American crime detection and generated so much publicity at home and abroad that it was touted as the "Crime of the Century." The arrest of Bruno Richard Hauptmann in connection with the kidnapping inevitably led to the "Trial of the Century." Although Hauptmann was almost universally detested at the time of the trial, the tide of public opinion began to change with his conviction. In the decades following Hauptmann's execution, writers have advanced one theory after another seeking to pin the blame upon various members of the Lindbergh household and others. Almost every aspect of the crime and the investigation has been examined and critiqued—with one exception. No one has written a critical analysis of the trial itself. This book seeks to remedy that omission by investigating with an investigation and evaluation of the marshaling, presentation, and arguing of the evidence, as well as and a study of the post-conviction litigation.