This evening I received a gold medal from the Florida Authors and Publishers Association for my book Six Capsules: The Gilded Age Murder of Helen Potts. 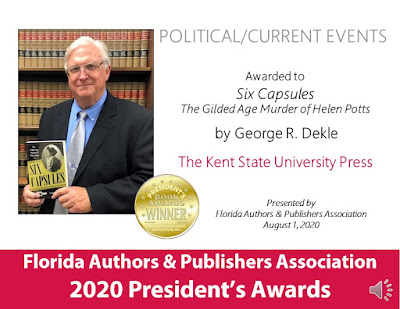 I also recently received notification that Six Capsules is a finalist in the Royal Palm Literary Award Competition which is held by the Florida Writers Association. The winners will be announced in October. 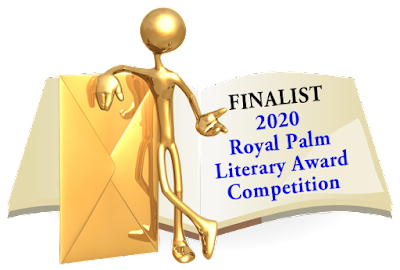 REMOVING THE OBELISK: A MODEST PROPOSAL

In February of 1864 a small force of Confederates marched eastward from Lake City to confront a force of Union soldiers marching west from Jacksonville. They met and fought Florida’s largest Civil War battle on February 20, with the Confederate forces emerging victorious and the Union forces retreating to Jacksonville. Approximately 151 Confederate soldiers died defending Lake City that day, and they are buried in Memorial Cemetery near the old football field.

Later in that year General Ulysses S. Grant decided upon a strategy of degrading the South’s war making capacity by destroying the means of keeping the Confederate army supplied. The first phase of this strategy unfolded in May of 1864 in the Shenandoah Valley, which was considered the breadbasket of the Confederacy. Grant sent General Philip Sheridan to the Valley with orders to completely devastate its ability to produce agricultural products. He supposedly instructed Sheridan to render the Valley so desolate that “a crow flying over it would have to carry his own rations.” Sheridan followed his orders to the letter, completely destroying everything of agricultural value in his path. He wrote to Grant:

I have destroyed over two thousand barns filled with wheat and hay and farming implements; over seventy mills filled with flour and wheat; have driven in front of the army over four thousand head of stock, and have killed and issued to the troops not less than three thousand sheep. This destruction embraces the Luray Valley and Little Fort Valley, as well as the main [Shenandoah] Valley.

In November of that year General William Tecumseh Sherman marched south from the smoldering ruins of Atlanta, Georgia, on his famous (or infamous) march to the sea. Saying that he would “Make Georgia howl,” Sherman cut a swath of destruction 60 miles wide and 285 miles long from Atlanta to Savannah.

Although it was highly unlikely that Union General Truman Seymour would have wrought similar devastation on Lake City had he been successful in reaching the town, contemporary Lake Citians could not have known that, and they must have been very thankful to the men who gave their lives in defense of the town.

For as long as I can remember an obelisk has stood in front of the courthouse in Lake City commemorating the sacrifice of those men who died defending Lake City. It is not a statue of a Confederate general. It merely recites what the men did, who was in charge, and gives a list of some of the fallen. I have no doubt that it was erected at a time of hard feelings toward those “damnyankees” who turned the South into the equivalent of a Third World country, but the war is now more than a century in the past. There are probably more descendants of “damnyankees” living in Lake City than there are descendants of people who lived here during the Civil War. The time for hard feelings should be over.

Some people now want to remove that monument. I say to them that the time for hard feelings should be over. There is a world of difference between an obelisk commemorating men who died defending their hometown from a possible "Shermanesque" destruction and a statue of a slave-trading Confederate general suspected of overseeing the massacre of black Union soldiers at Fort Pillow.

I suggest that the obelisk stay, but that something be added to it. There were other men who died at Olustee that day, and some of them were members of the most prestigious unit of black soldiers in the Union Army, the 54th Massachusetts Volunteer Infantry Regiment. Indeed, the 54th Massachusetts and the 35th United States Colored Troops fought the rearguard action which covered the retreat of the Union forces.

There are two blank faces on the base of the obelisk. Why not add a commemoration of the Union troops, black and white, who gave their lives in a cause they deemed just as important and just as noble as defending home and hearth against an invading army?

A tribute to the Union soldiers could go on the blank side of the obelisk visible from the sidewalk. On the blank side facing the shrubs, it might be possible to engrave a few lines from Thomas Hardy’s “The Man He Killed:”

"Had he and I but met
By some old ancient inn,
We should have sat us down to wet
Right many a nipperkin!

"But ranged as infantry,
And staring face to face,
I shot at him as he at me,
And killed him in his place.

"Yes; quaint and curious war is!
You shoot a fellow down
You'd treat if met where any bar is,
Or help to half-a-crown."

DEFUND OR DISBAND THE POLICE DEPARTMENT?

Why is it that neither Vespasian nor Suetonius was upset by the fact that a dog was running around the streets of Rome with a dead man's hand in its mouth? Because in the the largest, richest, most powerful city in Western Europe it was normal to see rotting human bodies, victims of disease or homicide, littering the streets. Some murderers had the decency to drop the bodies of their victims in the Cloaca Maxima, the gigantic sewer running under the streets of Rome, but others couldn't be troubled to expend the energy necessary to move one of the heavy stone slabs which served as manhole covers for the Cloaca Maxima.

If you wanted the murderer punished, you had to go to court and apply for permission to prosecute the killer. If you got permission, the killer would be notified that a case was pending against him, and it was up to him to decide whether to come to court and answer the charges or simply skip town.

How is it that the bodies of homicide victims could just rot in the streets with nobody to care and no satisfactory way to achieve justice for their deaths? Rome had no police force and no public prosecutor.[*]

Of course, the city fathers of Ancient Rome had enough money to insure their own security, and to Hades with the common people of the city.

Now it seems that the city parents of many of our large urban areas want to emulate the model of ancient Rome by defunding or disbanding their police departments. I'm sure the city parents won't suffer any ill effects of such a decision, but I expect to see the violent crime rates skyrocket in those localities.

[*] Rome did have an officer charged with keeping the streets clean, but he had trouble keeping up with the ever-growing litter of dead people and dead animals, not to mention the ever-growing piles of human refuse dumped in the streets. Most Romans living on the upper floors of apartment buildings found it too much trouble to carry their chamber pots to manholes, so they just emptied them out the window. Piping to the Cloaca Maxima was out of the question because P-traps had not yet been invented. If you piped directly into the Cloaca Maxima, vile smells, noxious insects, and rodents could invade your home. And if the Tiber flooded, which it frequently did, you'd have quite a backup problem.
Posted by George R. (Bob) Dekle, Sr. at 3:51 PM No comments:

HOW IS AMERICA DOING IN THE BATTLE AGAINST CORONAVIRUS?

How is the USA doing in the battle against the Coronavirus? To hear the news media, we’re doing just awful. If you look at the website https://www.worldometers.info/coronavirus/?utm_campaign=homeAdvegas1?%20#countries it sure looks like we’re doing a slop job. We’ve got more cases than any other country, and we’ve had more deaths than any other country. We’ve really fumbled the ball on this thing. Or have we? One statistic that the chart on the Worldometers website doesn’t include is the population of each country. Another is the rate of death per 100,000 population. Another statistic is the percentage of deaths per number of infected. Let’s look at the top six countries on Worldometers’ chart.

First off, we notice that the top six countries for infections are America and five Western European countries. These countries are some of the most open countries in the world, and we can expect that infections will cross their borders and spread easily in the absence of drastic measures not in keeping with traditional Western freedom. Being averse to surrendering freedom, all these countries were slow to take those drastic measures, and therefore they’ve all got infection totals at 93,000 or more (as of April 14, 2020). This is one of the consequences of living in an open society.

But which of these countries has the worst problem with Coronavirus? Let’s look at the raw numbers.

Ranking the countries by number of cases (as of April 14), we get this array:

It doesn’t look good for the USA, does it?

Now let’s rank them by number of deaths:

There are some changes in the order, but the USA is still number one. Doesn’t look good, does it?

But we should look at a more revealing statistic than mere raw numbers. What percentage of the population have contracted Coronavirus? (Populations were determined by reference to that infallible source of truth, Google):

The rankings change drastically, and by this measure the USA doesn’t look so bad. We’ve dropped to fourth.

Of the confirmed cases, how many patients have died (as of April 14)?

Another shakeup in the rankings, and America drops to number five. The much-maligned medical system of the United States seems to be doing a pretty good job of saving the lives of confirmed Coronavirus patients.

Once again, only Germany is doing better than the USA in deaths per 100,000 population.

Of course, as Yogi Berra once said, “It ain’t over ‘til it’s over,” and the pandemic is far from over; but so far it doesn’t look to me as though the USA is doing as awful a job containing the Coronavirus as many in the media would have us believe.

I haven't been very active on the blogging scene for quite some time as I have been laboring to finish a new book. I'm not quite through with the project, but I can see the light at the end of the tunnel. It's another murder case from Gilded Age New York City involving the mutilation murder of a prostitute in one of the worst slums in the city. Sound familiar?

At the time of the murder there was rampant speculation that Jack the Ripper had come from England to see if New York City's famous chief of detectives (Thomas Byrnes) could do any better a job of catching him than Scotland Yard had. An illegal immigrant known as George Frank aka Frank Sherlick aka Ameer Ben Ali was arrested, tried, convicted, and released after serving 11 years of a life sentence. History remembers the case as a false conviction, and over the years numerous suspects have been advanced as the real killer of the unfortunate prostitute.

Although I take a crack at solving the case myself, my primary purpose is, as always, to describe and critique the performance of the lawyers involved in the prosecution and defense of the case.  It is a truly remarkable case for a number of reasons, including the highly sophisticated forensic science which the prosecution used in obtaining the conviction, and the pivotal role played by the press in getting the defendant released from prison.

I'm in the process of polishing the book for presentation to prospective publishers. Wish me luck. Better yet, wish me some talent as I try to put my sentences together in literate fashion.
Posted by George R. (Bob) Dekle, Sr. at 3:24 PM 2 comments: