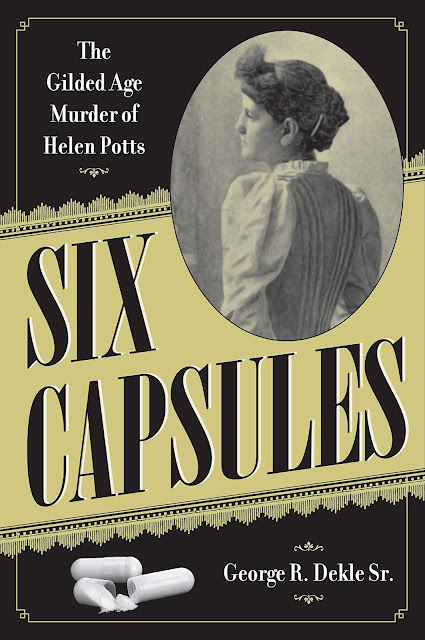 My latest book is nearing publication. and I am quite happy about how things are going with it. Unlike some previous publishers I've worked with, Kent State University Press did not ask for my input on cover design, which is fine with me. Most other publishers who have asked completely ignored my suggestions. I think KSU Press did a jam-up job of designing the cover. It is period appropriate, and it includes the one thing that I thought should go on the cover, a depiction of the murder weapon. Of course, I had no idea how to depict the poisoned capsule or what else to put on the cover.

Another thing that KSU Press did was change my title without asking me about it. This is completely alright with me, too. Other publishers have involved me in the tedious process of changing my working title, and it was a gigantic pain in the neck. Besides, KSU Press came up with a far better title than the one I had given the book. Six Capsules: The Carlyle Harris Murder Case just isn't as good as Six Capsules: The Gilded Age Murder of Helen Potts.

The third thing I really like about what KSU has done comes in pricing. It's more important to me that as many people as possible can afford to buy a copy than it is to make money from sales. The modest price of the book compared to most of my previous books is a definite plus.

The publication date is mid-May of next year, but you can pre-order it on Amazon and Barnes and Noble now. The book hasn't been on the Amazon website long, but it is already climbing the charts.

What's the book about, besides the murder of a beautiful young lady? This Annotated Table of Contents can give you an idea without giving away too much.

Chapter 1: The Sleep of Morpheus—Describes how Helen Potts died from morphine poisoning at the Comstock School in New York City, and how suspicion immediately fell upon her supposed friend, medical student Carlyle Harris.

Chapter 2: The Secret Marriage—Tells how Harris met and became infatuated with Helen and traces their romance up to and through their contracting a secret marriage.

Chapter 3: The Sacred Marriage—Describes how Helen’s mother learned of the secret marriage and began pressuring Harris to enter into a “sacred [public] marriage” with Helen, a move which Harris vehemently opposed.

Chapter 4: A World of Concern for Harris—Recounts the aftermath of Helen’s death: the coroner’s botched investigation and inquest, the media firestorm, Harris’s expulsion from medical school, and the bringing of charges against Harris with the District Attorney.

Chapter 5: Working Up a Case on Harris—Describes how Assistant District Attorneys Francis Wellman and Charles Simms reassembled the broken pieces of the coroner’s botched investigation and were able to amass enough evidence to indict Harris.

Chapter 7: The Prosecution Case Week One—Describes the course of the trial through the first week. Critiques both the prosecution’s presentation and the defense put up by Harris's attorneys,  William Travers Jerome and John Taylor.

Chapter 8: The Prosecution Case Week Two—Describes the course of the trial through the second week. Continues the critiques of both the prosecution’s presentation and Harris's defense.

Chapter 13: New Evidence?—Tells how a new defense lawyer, William Howe, took over the post-conviction litigation and marshaled a host of witnesses who stood ready to testify that Helen Potts was a morphine addict who had killed herself with an accidental overdose.

Chapter 14: The Rains Commission—Describes Howe’s media campaign to pressure Governor Roswell P. Flower into reopening the case. Tells how Flower submitted the case to a commissioner to give him recommendations on how to proceed with the case.

Chapter 15: The Curtain Falls—Tells the aftermath of Commissioner Raines's written report to the governor.

Epilog: The Carlyle Harris Case Today—Discusses how the Harris case might play out today in a modern courtroom with a modern forensic investigation.
Posted by George R. (Bob) Dekle, Sr. at 11:39 AM