ABRAHAM LINCOLN'S ALMANAC TRIAL: A LECTURE ABOUT THE TRIAL

Last week I went to Illinois to give a lecture to the Second Annual Abraham Lincoln's Legacy--Lessons for Today's Lawyers Seminar, which was put on by the Illinois State Bar Association (ISBA). What was really neat about the seminar was that it was held in the very courtroom where Abraham Lincoln tried his famous Almanac Trial. And the topic that I was going to speak on? The Almanac Trial, of course.

The less said about the airplane trip the better. The cheapest ticket I could find was a flight out of Orlando with a change of planes in Chicago. I got up at 6:00 AM, drove 2 1/2 hours to Orlando, got on the plane, flew for 2 1/2 hours to Chicago, and discovered that my connecting flight had been cancelled. I wound up sitting in O'Hare Airport for over 9 hours waiting on another connecting flight which kept being changed and postponed. I didn't get into the hotel in Springfield until 2:00 AM. It would have taken less time to get to the hotel if I had driven straight through from home. The only bright side of the flight was that I was able to polish off a 300 page book while sitting in O'Hare.

The next day I gave a lecture on Lincoln as a lawyer at the Abraham Lincoln Presidential Library. Christian McWhirter, the Research Historian at the library was a gracious host and made me feel very much at home.

One thing that struck me was that they had on display a replica of a statue of Lincoln which is located in Beijing, China. Instead of trying to describe it, I'll just show a picture I took of it and also a picture of the plaque describing it: 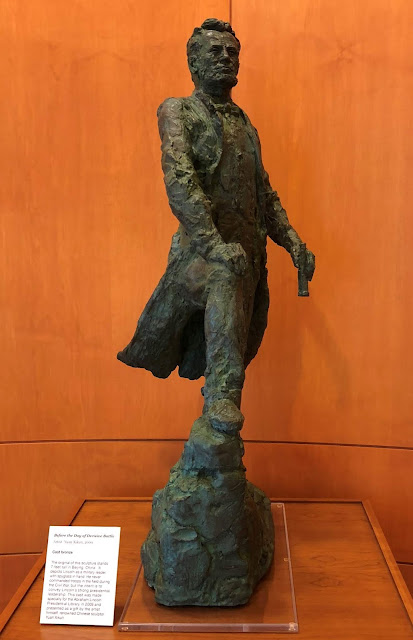 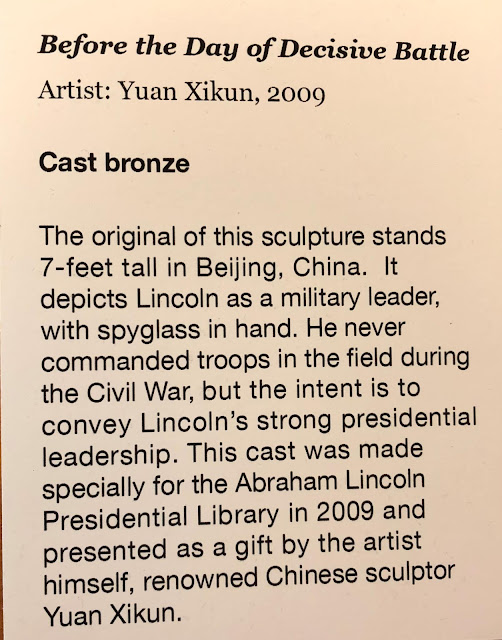 After the presentation I went down to Books on the Square and renewed acquaintances there. They had just gotten in a huge shipment of books on Lincoln and were in the process of uncrating the books and sorting them out. I managed to get out of there without buying too many books. I only bought four books--"Lincoln's Generals," "Lincoln and his Generals," "American Iliad," and "Lee's Tarnished Lieutenant." If I had more room in my suitcase, I probably would have gotten more. I slept like a log at the hotel that night.

The next day Judge Ron Spears, who acted as my unofficial host during my stay in Illinois, gave me a ride to Beardstown for the lecture to the ISBA. I was disappointed to find that my old friend, Corky Kinstle, was no longer manning the gift shop on the first floor of the old courthouse. He had recently fallen ill and was still recuperating. This did not prevent him, however, from coming to the courthouse for a brief visit, and I got the opportunity to thank him again for all the help he had given me when I was researching my first book on Lincoln the lawyer.

The old courthouse is mostly a museum of Illinois history, but they still hold court in the courtroom on the second floor. I actually got to meet the judge who holds proceedings in the old courtroom--Judge Bobby G. Hardwick, who was the program coordinator for the seminar.

I thoroughly examined the museum's collection of antique firearms, both long guns and handguns, and sorely regretted that they were locked behind glass where I couldn't get the feel of some of the weapons. One weapon in particular intrigued me. It was a wagon gun--a huge long gun with a massive bore designed to fire scrap metal. The gun would be placed on the tail gate of a Conestoga wagon and used as artillery for the protection of wagon trains.


The pictures hung on the walls of the courtroom had almost all been changed, and there was a photograph of Duff Armstrong that I had never seen before.

He certainly looked more presentable in the picture than he does in the more common picture of him in his uniform as a Union soldier.


I was the first speaker of the morning, and I gave them my interpretation of the conflicting eyewitness reports of the course of the Almanac Trial. I think the presentation was well-received. At least nobody threw rotten fruit at me.

The second hour I gave a lecture which surveyed all of Lincoln's murder trials--at least all of those murder trials for which we have enough information to say something about. After delivering that lecture I joined the audience and spent the rest of the day listening to the other presentations.

The gift shop downstairs had stocked up on my books on Lincoln. When I got there that morning, I saw a table which was "chock-a-block" full of the books. When I went downstairs at the end of the day, I saw that the table was almost empty. I spent some time signing books that some of the attendees had bought, and then it was time to go back to Springfield.

Judge Spears drove me back and treated me to supper at Smokey Bones Barbecue, and then he took me back to the hotel. I fell into bed and slept like a log until it was time to get up and go back to the airport. There were more delays at the airport, but I got home in time to see the second half of the Gator game. I might as well have been delayed a little longer.

All-in-all, it was an enjoyable trip despite the troubles at the airports. I met a lot of nice people, and I learned a lot about Lincoln's law practice from the other presenters.