Last Friday I spoke to the Minnesota County Attorneys Association. We flew into Minneapolis on Thursday and stayed through Monday. It was 81 degrees F when we left Lake City and -11 when we arrived at the airport in Minneapolis. As a lifelong Floridian who has seen more snow on faulty picture tubes than on the ground, I was not prepared for the drop in temperature. I saw a number of prosecutor friends I hadn't seen since they closed down the NDAA National Advocacy Center back in the early 2000's. The Center, which was subsidized by the Federal Government, served for many years as an elite training school for prosecutors, but it fell victim to budget cuts several years ago. I served as faculty there on several occasions and have nothing but fond memories of the place. I understand that there are plans to open a reincarnation of the Center in Utah, and I wish them the best of luck with the endeavor. 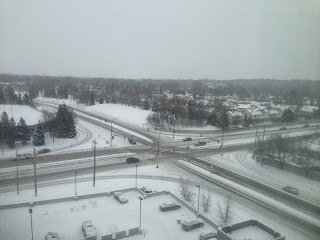 The View from Our Hotel Room
I was the last speaker on the MCAA agenda, and I was afraid that I would be speaking to an empty room as everyone checked out of the hotel and headed for home. I was pleasantly surprised to see a full house of approximately 200. I spoke for almost two hours on the investigation and prosecution of Ted Bundy, and the lecture seemed to be well-received. The main topic of the talk was the problems a prosecutor confronts in handling a high-profile serial murder case.

I was pleased to hear several prosecutors praise Cross-Examination Handbook: Persuasion, Strategies, and Techniques, which I co-authored with Ron Clark and William Bailey. The book was a labor of love, and I am gratified that practitioners find it useful for planning and conducting cross-examinations.

Lane (my wife) and I didn't get out much in the sub-zero weather, but we did get an opportunity to visit the Mall of America, a shopping center with an aquarium in the basement, an amusement park on the ground floor, and a multiplex cinema on the fourth floor. It also had a huge Lego store with the biggest Lego model I have ever seen (a gigantic robot). Except for the bitter cold, it was a pleasant trip.
Posted by George R. (Bob) Dekle, Sr. at 2:46 PM