BIG BUSINESS AND THE ROMAN LATIFUNDIA

When I was a senior in college, one of my courses required me to do a research paper on guerrilla warfare. Being a lover of ancient history, I decided to do my paper on a little known guerrilla war waged against Rome by the Numidian king, Jugurtha. The war lasted almost a decade, and the citizens of Rome became very weary of such a lengthy conflict against an opponent who posed little threat to the survival of the Roman state. Up until the time of the Jugurthine War, Rome raised its armies by means of a draft levied against property owners. They drafted only property owners because the soldiers were expected to supply their own equipment. The war became so unpopular that the Roman general Caius Marius began enlisting volunteers from the urban poor and providing them with equipment. This was the death knell for the draft, and soon all Roman soldiers were volunteers. Because of this change  in recruitment, the Republic slipped into a series of civil wars and  military dictators which culminated in the establishment of the Empire. Draftees owed their loyalty to the state, but volunteers owed their loyalty to the general who recruited them. 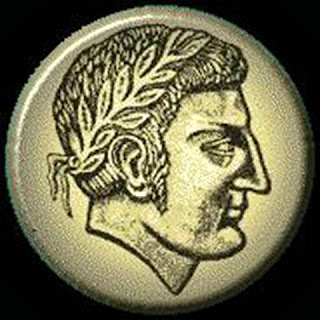 I wrote my paper in 1970, at the height of popular opposition to the Vietnam War. Seeing the parallel between the Jugurthine War and Vietnam, I predicted that the draft would be abolished and that the US would become vulnerable to military dictatorship. I was right about the draft, but wrong about military dictatorship. There were two other factors which contributed to the death of the Republic which were not present back in the 1970's--a gridlocked government and the latifundia (gigantic farms which pauperized the yeoman farmers who were the backbone of the Roman Republic). 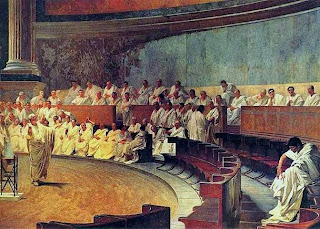 THE SENATE OF THE ROMAN REPUBLIC

As I observed in my post entitled "The Tragedy of the Commons," we now have governmental gridlock on a par with that existing during the decline of the Roman Republic. Although the family farm is becoming a thing of the past as agribusiness becomes larger and larger, we cannot compare big agribusiness to the latifundia. We ceased being an agrarian society in the Nineteenth Century.

We do, however, have a modern analog for the latifundia--big corporations. The mom and pop businesses which were so prevalent in mid-Twentieth Century America are dying out as big business drives more and more of them out of business. The latifundia were powered by chattel slaves; big business is powered by wage slaves. Slave owners had no concern for the welfare of the slaves, and (it appears to me) corporate America has little concern for its wage slaves. Of course, modern day big business doesn't physically mistreat, torture, or kill their workers--they just lay them off.

I don't think we're going to wind up being ruled by a military junta like the Second Triumvirate which finally destroyed the Roman Republic, but I do think that there is a real potential for something to happen to us very much like what happened to the Roman Republic. The Republic went through a turbulent time which ended with its quasi-democratic government becoming a dictatorship which looked like the old form of government but was nothing like it. We may well have begun to enter a turbulent time which will culminate in our government becoming something with only the outward appearance of democracy.